The wave of the pandemic is accompanied by protests. Europe led by Brussels protests restrictions and mandatory vaccinations 16:06 2021-11-24 UTC--5 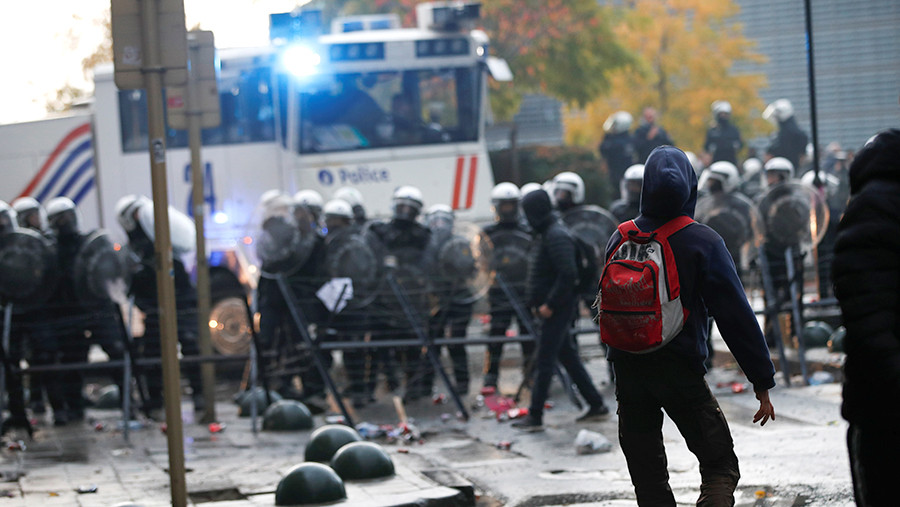 Last Sunday, thousands of people protested in Brussels under the slogan "Together for Freedom". According to the local police, about 35,000 people took part in it. Crowds of people personified resistance to the sanitary measures that were introduced in Belgium, including mandatory vaccination against coronavirus.

The action was initially allowed by the city authorities. Protesters began to gather on the main streets of the city at noon. A huge column of people moved from the Northern Station to the Southern One. The police asked people to disperse, blocking the road in the course of the movement of the protesters. The crowd of people was determined and clearly wasn't going to leave silently. The protesters tried to break through the police and began to build barricades, set them on fire, threw stones and firecrackers at the police. The law enforcement agencies decided to reason with the people using tear gas and water cannons. The protest turned from peaceful to aggressive. In the heart of the European Union, burning barricades burned, the central streets became like the epicenter of military operations with damaged police cars, destroyed terraces of cafes and restaurants.

This protest action became the personification of the fierce resistance of people to the introduction of a coronavirus certificate in Belgium from November 1, the presence of which determines the ability of residents of the country to visit restaurants, entertainment, sports facilities, as well as healthcare institutions. The non-acceptance of such measures by the Belgians reached a peak after the Belgian government announced that in the near future such a certificate would be valid in almost all spheres of people's public life.

The authorities have established such rules for residents of Belgium, under which the former way of life is available only if they have completed a full course of vaccination against coronavirus (received three doses of the vaccine), and at least two weeks have passed since the introduction of the third dose. Access to a normal life, the right to live and move freely can also be obtained by those who have been ill with COVID-19 over the past six months and can provide proof of this, who have a PCR test with a negative result. However, it is necessary to do this test every 72 hours. Restaurants for the unvaccinated are still available, but this category of citizens can only be on their territory on open terraces, which looks extremely unattractive in the conditions of the coming frosts.

It is worth recognizing that not only QR codes are the cause of popular indignation. Since November 17, a law has been in force in Belgium, according to which children over the age of 10 are required to wear protective masks indoors. In addition, from November 20 to December 13, enterprises are required to transfer their employees to remote operation for at least four days a week.

According to the assurances of the Belgian government, all these measures are necessary in connection with the fourth wave of COVID-19: since the beginning of October, there has been an active increase in the number of new cases of infection in the country: more than 10,000 new cases are recorded per day. About 200 people are admitted to hospitals with coronavirus infection every day. To date, approximately 2,500 patients with the detected COVID virus are in hospitals. Mortality from coronavirus is also high - about 23 people per day.

It should be noted that, according to official data, 87% of the adult population in the country are fully vaccinated against coronavirus. Despite this, the number of new infections in the country continues to grow. Local media have already started talking about the fact that the Belgian government is thinking about introducing mandatory vaccination and does not rule out the appearance of double control zones in the near future, where a person will need to provide not only a certificate of full vaccination, but also a negative result of a PCR test.

Not only in Belgium

Last weekend, large-scale rallies for the abolition of quarantine restrictions and mandatory vaccination were held in many European cities. So, about 40,000 people gathered on Saturday at a demonstration in Vienna. Rallies against restrictive measures and compulsory vaccination have recently been held in Austria with enviable regularity. A good reason this time was the announcement by Chancellor Alexander Schallenberg about the introduction of a universal lockdown. Strict restrictions have been imposed in Austria since November 22 and, according to the assurances of the authorities, will last 20 days. At the same time, not only unvaccinated citizens will be restricted in their movements, but also vaccinated ones who have already been ill with coronavirus. However, from December 13, the last categories of citizens will be allowed to visit public places if they provide the appropriate QR codes. In the meantime, absolutely all Austrians cannot leave their homes and apartments, except for urgent purchases or trips to work.

The last straw for the Austrian people was a message from the chancellor about the introduction of mandatory vaccination from February 1, 2022. As a result, last Saturday a huge crowd of people gathered in the center of Vienna. People called for the return of their right of free movement and for the abolition of forced administration of drugs against coronavirus. According to estimates of law enforcement agencies, the total number of people numbered about 40,000 people, some media sources even claimed about 100,000 participants.

In the Netherlands, opponents of restrictions and the introduction of mandatory vaccination took to the streets on Friday, November 19. The protests covered several cities in the country at once – The Hague, Roermond, Stein, Urk and Bunshoten. In Rotterdam, seven protesters were injured due to police warning shots, three protesters are currently in hospital with gunshot wounds. The next day, Saturday evening, the most alarming situation developed in The Hague: people burned bonfires in the middle of the streets and launched fireworks at police officers trying to disperse them.

Protest actions in Italy have not subsided for several months. Last Saturday, residents of Rome took to the central streets demanding the abolition of coronavirus restrictions and compulsory vaccination. Mariano Amici, a doctor who was dismissed due to refusal of vaccination, also spoke at the rally. Antonio Pappalardo, a former general and one of the leaders of the dissident covid, also addressed the authorities.

Recall that in Italy there is a Green Pass, that is, a digital certificate of vaccination, which gives its holders access to workplaces and public places, and also gives the opportunity to use intercity transport. Protests were also held in Turin, Genoa, Trieste, Bologna and Naples.

Rallies of those who disagree with the new way of life and new rules were also held in Switzerland, Croatia, Northern Ireland and other countries.