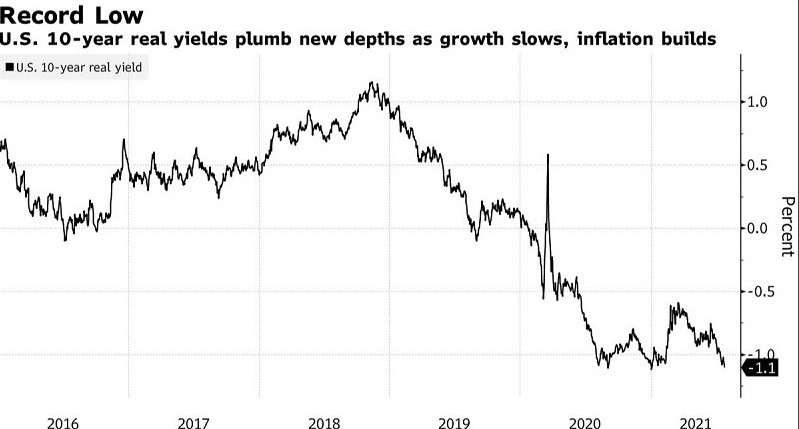 Goldman Sachs Group Inc. has published an updated forecast for 2022, according to which US economic growth will slow down significantly.

The company's analysts attribute this to the fading of reflationary interest in the service sector.

The bank expects that the US economy will return to a growth trend of 1.5-2% in the second half of next year. It also lowered its GDP growth forecast for the remaining two quarters of 2021 by one percentage point-to 8.5% and 5%, respectively.

Economists led by Jan Hatzius share: "At the moment, our forecast differs from consensus expectations by the sharp slowdown that we expect over the next year and a half."

The updated forecast was a direct consequence of the ongoing spread of the coronavirus. For the economy, this means that the recovery of the volume of entertainment and office work may take longer than predicted.

Analysts stressed that the growing level of remote work also does not bode well for the economy and office-related services: "It is becoming increasingly obvious that, although mass vaccination has had a huge impact on the activities of the service sector, it is unrealistic to expect that fears of viruses will instantly disappear completely." Economists lowered the forecast of consumption growth for the second half of this year, but kept the annual GDP forecast at 6.6%.

Due to concerns, the real yield of 10-year US bonds fell to a record low.

The rate minus inflation fell by five basis points to -1.127%. This is much more than -0.8%, which we considered with you earlier.

The downward movement was compounded by a lack of trading liquidity, as the 10-year break - even rate - the market indicator of the average annual level of consumer prices over the next decade-remained unchanged at 2.34%.

Peter Chatwell, head of multi-asset strategy at Mizuho International Plc., shares: "We are in a slowdown mode in the US, as the recovery becomes more mature and broad-based, while inflation is pressing."

It is not only the talk around the upcoming decision of the Federal Reserve on Wednesday, when officials will discuss the prospects for further monetary stimulus, that adds fuel to the fire. Traders are betting on an extension of the dovish policy as a result of the meeting - even after inflation accelerated at the fastest pace in more than a decade last month on an annualized basis.

The market is also under pressure from the threat from Congress about a possible technical default. Republicans have staked their refusal to agree on raising the upper limit of the state loan if the Democrats do not restructure the draft infrastructure law. One can only imagine what is happening in the offices of the White House right now.

The stock market was hit by the news that China continues to tighten measures against technology companies, forcing Asian indices to bend. If the trend continues, a serious drop in the shares of global companies located in China may pull the world market down, as it has happened before, especially against the background of the rising cost of raw materials from China, as well as the cost of deliveries from this part of the world.

Bunds yields fell to a five-month low after the Munich-based Ifo Institute index fell to 100.8 from 101.7 in June. At the same time, economists surveyed by Bloomberg expected an improvement. 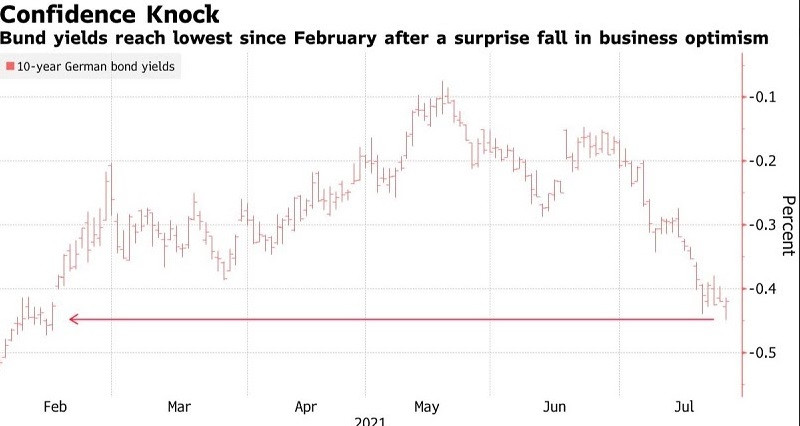 The German data raised concerns about the economy's ability to withstand the delta option, but there are already concerns that the latest growth looks exaggerated.

Antoine Bouvet, senior rate strategist at ING Group NV, said that he would not "stir up the national debt of the US and Germany with a stick": "the volatility of treasury securities has increased - higher risk and lower yields are not a winning combination."

Nevertheless, the rally has not exhausted all its possibilities. The supply of bonds in the summer months is low, and demand from central banks is high, so investors can buy everything they can reach, supporting the market.

Imogen Bachra, strategist at NatWest Markets, is cautiously optimistic: "The rally seems exaggerated, but we could stay in this new range for several weeks. The markets will want more evidence of the effectiveness of the vaccine and an increase in the number of cases in the UK and Europe."

All together, this indicates a deterioration in investor sentiment against the background of the rapid spread of the delta option, which threatens to disrupt the economic recovery. And when this happens, investors are attracted to safe-haven assets, which has already begun.

A safe asset is essentially any asset that you can sell at any time and be sure to get your money back. Most often, short-term government treasury loans or bank deposits are used as such assets. Consequently, when the demand for government securities exceeded the supply, economists called it a "shortage of safe assets".

The phrase "safe asset" may seem boring to an intraday trader. More speculative assets, such as bitcoins and CFDs on Tesla Inc. shares, seem more attractive.

But safe assets are the most important and, perhaps, in some sense, the most risky assets on the market, because they have the status of safe havens.

They are present in almost every asset pricing model, are used as collateral and are necessary for the regulation and management of currencies. They affect how much your bank pays interest, your mortgage rate, how much debt the country can afford and at what level the central bank sets interest rates.

For decades, economists have argued that there is a shortage of safe assets in America. And according to some economists, this is what caused the financial crisis and the slowdown in growth. Now it seems that the deficit is over – the US Treasury continues to issue bonds in bags. But this does not mean that we have nothing to worry about anymore.

The bond of a large stable government, such as the United States or Germany, is considered the safest of assets.

Since all people want to keep their money in a safe place, banks need safe assets for regulatory reasons, and foreign governments want to manage their currencies, the demand for these state-issued assets always exceeds the supply.

When this happens, the private sector becomes more active and offers other alternatives, such as a money market fund or a bank deposit.

But sometimes it turns out that reliable private sector assets are not as safe as, for example, it was in 2008. And since supposedly risk-free assets are scattered throughout the economy, the consequences of failure are potentially catastrophic.

It was assumed that the lack of safe assets creates just such a dilemma. Therefore, some economists and pundits have argued that governments should issue more debt only to meet market demand. While other economists insisted that issuing debt in response to demand could cause more problems in the future.

The whole problem of the deficit arose when banks began to engage more in wholesale sales, rather than retail, which meant that they needed to buy more bonds – to stabilize liquidity.

Another new source of demand came from foreign governments that wanted to manage their currencies and capital flows after the Asian financial crisis, insuring themselves through the debt obligations of leading economies.

For about 20 years, the demand for reliable state assets was much higher than governments could issue. In part, it was also influenced by the pernicious practice of banks to request a much larger volume of bonds in order to give "at least something", which is still practiced today.

As a result, interest rates have fallen and there has been a boom in the creation of alternatives to the private sector, such as mortgage-backed securities. Investors desperate for security suspended their judgment and bought assets that were not as safe as the national debt.

But the shortage of safe assets now seems to be quietly and peacefully ending, at least for US Treasury bonds. This is partly due to the fact that the Fed has started paying interest on reserve accounts that they hold on behalf of the country's banks. The Fed started doing this after the financial crisis, creating a new risk-free option for banks with interest payments, which they are increasingly using.

The US government is also issuing much more debt to cope with the pandemic, while foreign governments seem to have lost their appetite for US Treasury bonds. 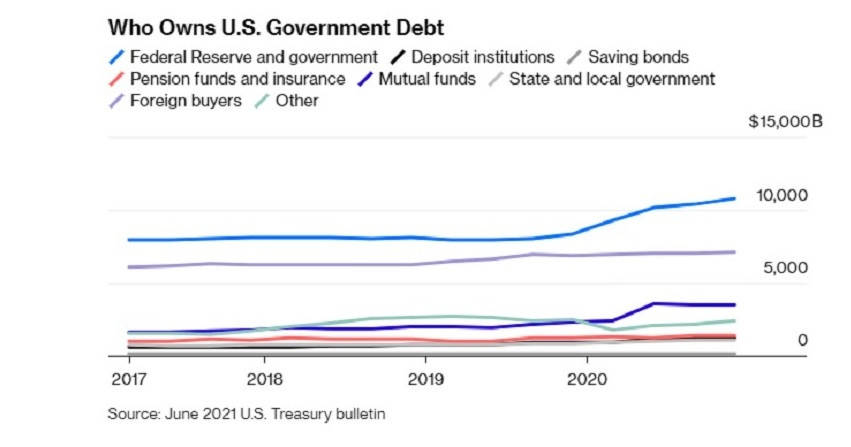 True, there may still be a shortage of safe assets in Europe, because countries such as Germany and the Netherlands are not joining the growth of America's debt-fueled spending.

The scale of the disaster is even difficult to imagine.

Let's assume that the current surge in inflation will not be so temporary, as the new forecast of Goldman Sachs directly indicates. Then the Fed will have to use its tools to rebalance yields, which means selling instead of buying bonds.

This will mean that there will be more safe assets on the market and interest rates will start to rise.

Some end investors may like this, but the US manufacturing sector is used to low rates.

For example, the return of the mortgage rate to 8% now seems unthinkable, and this can cause serious problems in the housing market.

An excess of low-risk assets will also make it difficult to sell them, which can cause many disruptions in the bond market, since low-risk bonds are effectively used as a currency.

Two decades of deficits mean that a generation of politicians has taken low rates for granted. The insatiable appetite for bonds meant that the government could issue as much debt as it wanted at very low rates. This explains why the US is now considering a $ 3.5 trillion spending package when we are not even in a recession.

But if we are now faced with a surplus of safe assets, rates will rise, as will the cost of all new debt, and the obligations that we already have will suddenly become much more expensive.

To what extent is such an outcome possible?

It is quite difficult to predict the market's reaction to a prolonged reflation, although we try. Especially if inflation exceeds the target. But the more bonds are issued now, the more difficult it will be to sell them later, if such a day does come.

In the meantime, investors are beginning to doubt the reliability of bonds as a way of hedging stocks. And some economists directly call low interest rates a financial pyramid.